Samburu National Reserve is a famous safari destination located in the Northern Park of Kenya. The park is borders Buffalo springs National reserve separated by Ewaso Nyiro River. The park is arid and semi-arid with annual temperature 18 – 30 degrees Celsius; hot during the day and cool at night. Samburu National Reserve covers an area of 165 square Kilometers with conservancies and group ranches bordering the main reserve such as the Kalama Conservancy, West Gate Community Conservancy and Namunyak Wildlife Conservancy.

Wildlife in the Samburu National Reserve

Samburu National Reserve is a unique safari destination in Kenya with abundance of rare species of animals including; reticulated giraffe, gerenuk, Grevy zebra, Somali ostrich and beisa Oryx. The reserve is also home to a population of close to 900 Elephants. Large predators such as the Lion, Leopard and Cheetah are an important attraction (Kamunyak the famous Lioness that adapted a baby Oryx is a resident in the reserve). Samburu is infact one of the better locations in Kenya to spot Leopard. Wild dog sightings are also a common attraction to this unique protected area and Birdlife is abundant with over 450 recorded species. 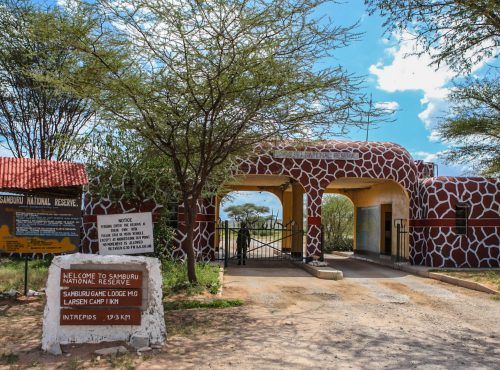