Mount Kilimanjaro; the highest Mountain in Africa (5895M) is located north-east Tanzania near Moshi town. The Mountain is surrounded by mountain forest with its snow peak looming over the savannah. Mount Kilimanjaro is one of the largest volcanoes in the world with three main volcanic peaks; Kibo, Mawezi and Shira. The mountain has five main vegetation zones from the lowest to the highest point:  Lower slopes, montane forest, heath and moorland, alpine desert and summit. The whole mountain including the montane forest belt is very rich in species, in particular mammals, many of them endangered species.  A number of animal species can be found around the mountain including tree, hyrax, grey duiker, cape buffaloes, elephants, blue monkeys, bushbuck, black and white colobus and leopards. 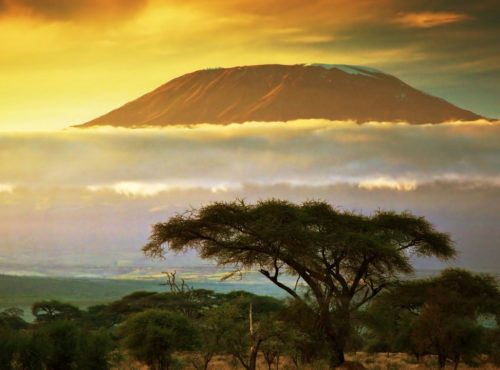