Masai Mara National Reserve is located south-west of Kenya which covers 520 square kilometers expanding to border Serengeti National Park on the other side of Tanzania. The park was establish in 1961 and named The Masai Mara in honor of Maasai People whose ancestors have settled the region for many years. The Masai Mara is best known as safari destination in Africa, entrance fees if staying inside the reserve is $70 per person while entrance fees if staying outside the reserve is $80 per person while for children from 3 years to 12 years is $40, per 24 hours respectively. The Reserve is unfenced even along the bordering Serengeti National Park in order to ensure there is free movement of wildlife throughout the ecosystem. The Mara ecosystem main stakeholders include the wildlife, Mara local’s tribesmen, the Government of Kenya and Tour Operators with the main goal of working together for the mutual benefit of the environment, the wildlife and all the people involved

Masai Mara National Reserve is the World Cup of Wildlife viewing together with Serengeti National Park offers the best safari destination. Masai Mara is a home to rich and diverse wildlife where many tourist come all around the world during their African Safari. Animals which can be spotted during your visit to Masai Mara include; the famous Big Five (Lion, Elephant, Rhino, Leopard and Buffalo) and the Big Nine to additionally include the Cheetah, Giraffe, Hippo and Zebra. The Maasai Mara is the only protected area in Kenya with an indigenous black rhino population, unaffected by translocations, and due to its size, is able to support one of the largest populations in Africa. Hippopotamuses and crocodiles are found in large groups in the Mara and Talek rivers. The plains between the Mara River and the Esoit Siria Escarpment are probably the best area for game viewing, in particular regarding lion and cheetah. Antelopes including; grant gazelles, duikers, impalas, giraffes can be found here and more than 500 bird species.

Wildebeest Migration is something you should never miss to see during your safari in East Africa. The Wildebeest Migration take place between the Mara Region and Serengeti ecosystem whereby wildebeests, topi, zebras and Thompsons gazelle migrate in millions from Serengeti to Masai Mara crossing the Mara river in search of green pasture and water. The Migration takes place during the month of July and October each year.

A hot air balloon safari over Masai Mara National Reserve, though, is an once-in-a-lifetime experience. We always recommend our guests to have 3 day to enjoy Balloon safari over the Mara region. The game driver over Masai Mara takes place early in the morning for one hour, worth unforgettable memories.  There is also a visit to Maasai Local village which take place mostly in the evening after your game drive. Banok safaris will arrange all this at a better price. Other activities we can arrange for you include guided nature walks, bush breakfast, honeymoon dinner set etc… 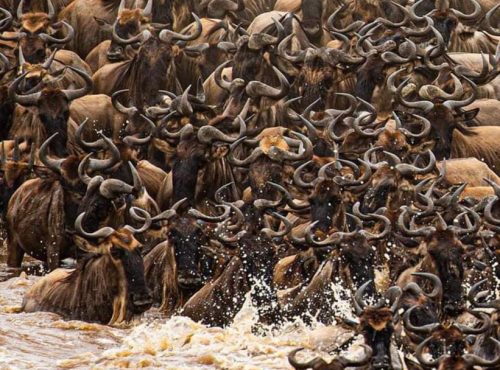