Lake Nakuru is a protected area under Ramsar convention on wetlands. The Lake Started as a small lake, then late became a famous big lake surrounded by mountains. The park covers an area of 188 square kilometers fenced all around to protect mostly black and white rhino as well as giraffes Nakuru is an alkaline lake, which is what further draws birds and wildlife to its shores. The national park and lake are most renowned for the tens of thousands of flamingos which can reach over a million at their peak.  The best place to view the view flamingos is from Baboon Cliff, however, the conditions have become unfavorable for these birds due to changes of water level each year and they have moved to other nearby rift valley lake.

Wildlife in the Park

Visitors can enjoy the wide ecological diversity and varied habitats because Lake Nakuru National Park is ideal for bird watching, hiking, picnic and game drives. Wildlife in the park like Predator species include lion, cheetah, leopard, and hyenas.  Large pythons might be found as well.  Giraffe and the two species of rhino (Black and White Rhino) are mammalian highlights. Other animals include waterbuck, hippos, Reedbuck, Bushbuck, olive baboon, vervet monkey, black and white colobus Monkey and zebras. Lake Nakuru National Park has over 400 species of birds including; African fish eagle, Verreaux’s eagle, Goliath heron, kingfisher, and of course an abundance of flamingos. The park can be visited all throughout the year.

Lake Nakuru National Park is located 156km from Nairobi. The most commonly used route into the park is via the main gate, 4 km from Nakuru Town Centre. It is also possible to enter the park from the main Nairobi Nakuru road at Lanet Gate. The Nderit Gate is used by people accessing the park from Masai Mara or Elementeita. The Naishi airstrip services the park for tourism and KWS activities. The park has an adequate and well serviced motorable roads that make most parts of the park accessible. 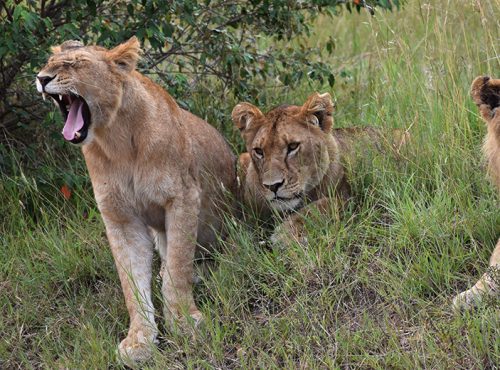