Hells Gate National park is the smallest park established in 1984, located south of Lake Naivasha covering 68 square kilometers. Spectacular scenery including the towering cliffs, water-gouged gorges, stark rock towers, scrub clad volcanoes and belching plumes of geothermal steam make it one of the most atmospheric Parks in Africa.  Red walled cliffs travel along the gorge and feature two volcanic rock formations known as Fischer’s Tower and Central Tower. A smaller gorge trails away from Central Tower and leads to an area of hot springs.  The springs are hot enough to cause burns.  There are two extinct volcanoes known as Olkaria and Hobley’s found with the park boundaries.

Wildlife in the park

The park is famous for having beautiful sceneries and abundant variety of wildlife. Some of the predator species include lion, leopard, hyena, serval, and cheetah.  Other popular species include zebra, eland, buffalo, hartebeest, klipspringer, reedbuck, hyraxes, and Thomson’s gazelle. The 100 species of birds can be found there with some of the larger species including the Verreaux eagle, augur buzzard, and vultures including the rare lammergeyer vulture. Also visitors can visit and hike Mount Longonot which located inside the park.

The park is popular due to its close proximity and easy access from Nairobi, 90km drive. Also another advantage for visitors is that park entrance fees are lower compared to other parks. 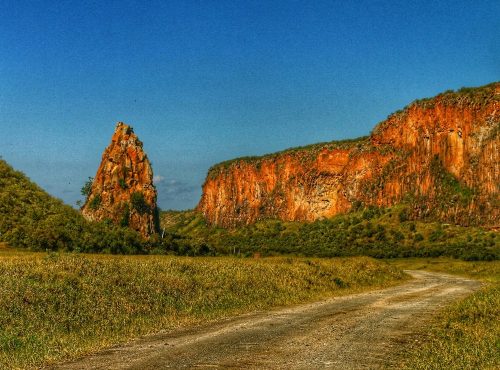