Amboseli National park is a protected National Park in Kenya established the year 1974, and declared a UNESCO in 1991. The park covers an area of 392 square kilometers which extends to the neibouring Tanzania border. The main inhabitant in the surrounding region are Maasai community.

Amboseli National Park is known due to the most researched elephant in the world, Echo, and the subject of many books and documentaries, followed for almost four decades by American conservationist Dr. Cynthia Moss. Echo died aged 60 years in 2009. The park was also a safe haven to an incredible bull elephant named Tim. This mighty leviathan quickly became one of the major attractions with his size and iconic tusks that reached the ground and was estimated to be around 50 years old at the time of his death from natural causes on February 5th 2020.

Wildlife in the Amboseli National Park

Amboseli National Park is famous in Africa for been the best place to get a free-ranging elephants and other animal’s species. Mount Kilimanjaro, the highest Mountain in Africa offer the best view for visitors early morning or before sunset. Nature lovers can explore five different habitats here ranging from the dried-up bed of Lake Amboseli, wetlands with sulphur springs, the savannah and woodlands.  They can also visit the local Maasai community who live around the park and experience their authentic culture. Other animals in the park you can spot during your game drive includes; Leopard, Cheetah, Wild dogs, Buffalo, Elephant, Giraffe, Zebra, Lion, Crocodile, Mongoose, Hyrax, Dik- dik, Lesser Kudu, and Nocturnal Porcupine. Prolific birdlife features 600 species.

Amboseli National Park can be accessed by road or flight from Nairobi or Mombasa. From Nairobi by road with a tourist vehicle, it takes 3 hours, 45 minutes, 215km. From Wilson Airport, it takes 45 minutes to land at Amboseli Airstrip. The roads inside the parks are not in good condition but there is good ways for the guide to tracks animals in the park. 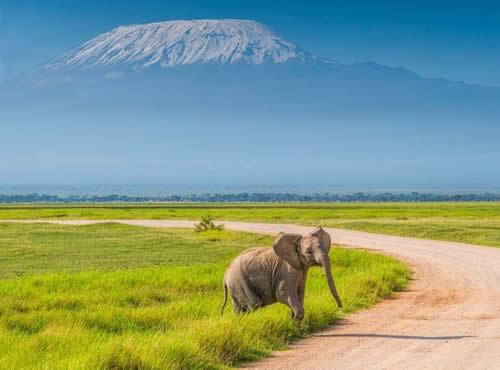